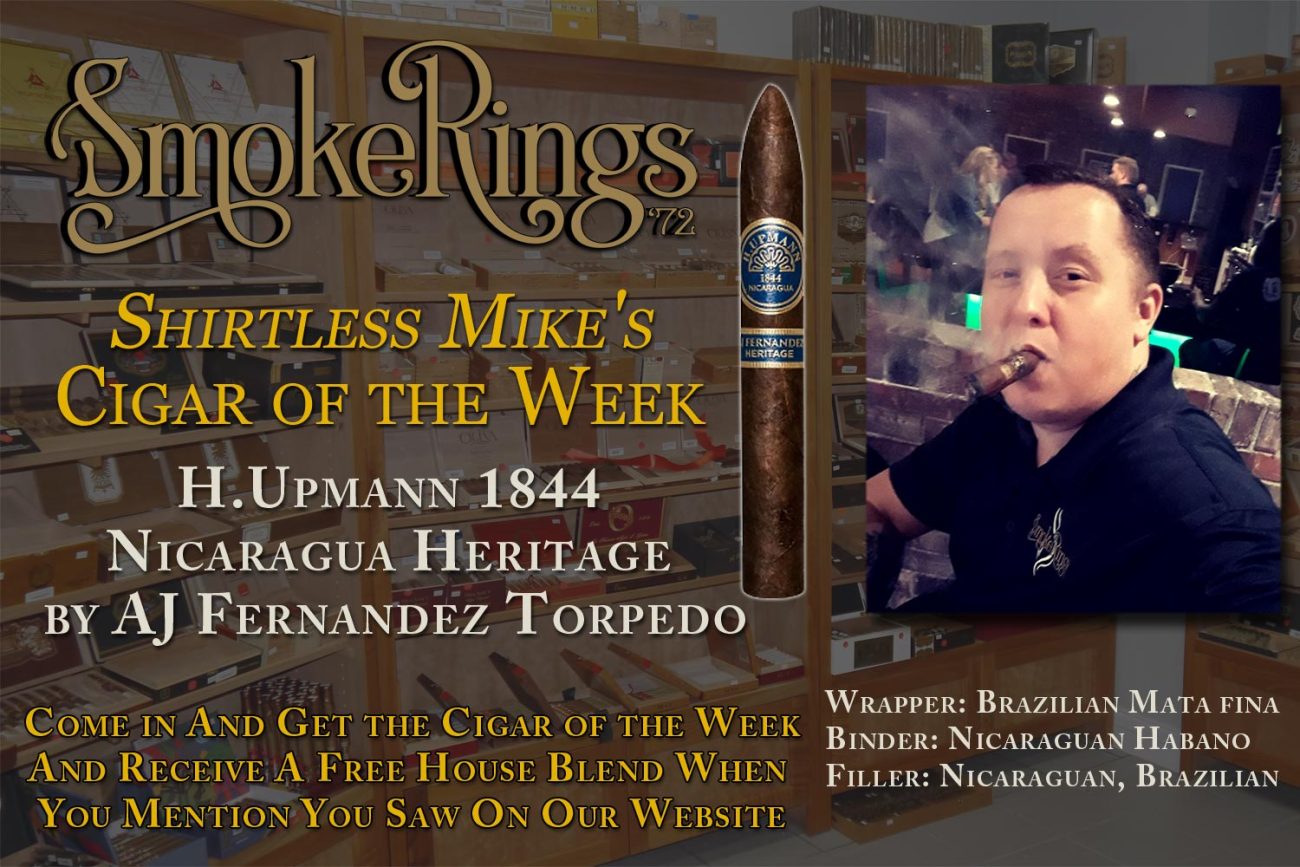 This Week I am reviewing the H.Upmann 1844 Nicaragua Heritage by AJ Fernandez. It’s no secret that AJ Fernandez has his hands in many blends in the cigar industry.

This is another great example of a fine blend that the masses have grown to love. This cigar was named to commemorate the year that Herman Upmann started his first cigar factory in Cuba.

Upmann was a German banker who invested in a cigar factory in Cuba. The company went bankrupt in 1922, but eventually the name and production was acquired by Menendez y. Garcia Co, the company that made Montecristo Cigars. During the Cuban revolution the nationalization of Cuban cigars occurred, as a result Menendez y. Garcia eventually moved the brand to the Canary Islands and then the Dominican Republic. The brand would eventually be owned by Altadis and be made in the Dominican Republic, Honduras and through AJ Fernandez in Nicaragua. Now that I got the history out of the way….

As I lit this cigar up I got coffee bean notes, along with white pepper and cinnamon, A little bit of fruit flavor and something else I can’t really make out, but is a really good note combination. Eventually I got hints of cocoa along with more cinnamon which kind of reminds me of a milder version of fireball candy. After I got past these notes I started to get a little more earth and it transitioned into notes that reminded me more of baking spice. Ultimately this cigar is burning great. I am not normally a fan of the torpedo shape of a cigar but this torpedo is smoking like a Robusto or a Toro with a great, effortless draw!

Coming in towards the middle of the smoke I started to taste some cedar notes with baking spice still present but present in the background with a slight hint of floral notes. This cigar has remained a medium to full bodied smoke throughout my smoking experience. This cigar is consistent in flavor transitions and the way it burns right up to the end.  If you like this strength level of cigars, If you like what AJ Fernandez blends and If you like good cigars then this is a must try next time you come in for something new!