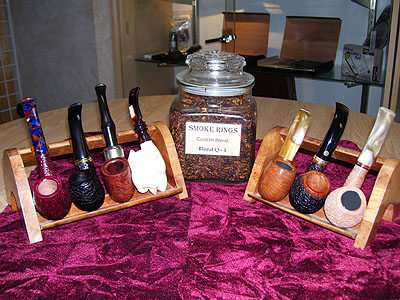 Pipes are a timeless accessory that every cigar smoker needs. Pipes are one of the most significant ways to show your personality and style. The right pipe can make you feel like a millionaire, while the wrong one will leave you feeling uncomfortable.

For many smokers, a Savinelli pipe has been the best choice for years because of its high-quality design and durability. The Savinelli company has been around since 1876, the dawn of modern pipe manufacturing. When Achille Savinelli Sr. opened his first retail store, it was one of the first shops in the industry to solely concentrate on tobacco and related goods. He made his mark by combining traditional design elements with a talent for aesthetics. Because of this, he was considered a pioneer in introducing Italian pipes to pipe collectors. Savinelli introduced these beautifully designed handmade pipes, which are distinct from the preceding “basket pipes”.

By focusing on quality, creativity, and design, Savinelli has built a reputation among pipe smokers to be a great place to turn for a luxurious smoking experience. Are you eyeing Savinelli pipes for sale? Find out what makes them worth getting.

What makes the Savinelli design so popular and distinct?

The color of a Savinelli pipe is one of the first things noticed by many customers. Although many of Savinelli’s most well-known and time-tested designs use traditional pipe colors, pipes like Clark’s Favorite, became an eye-catcher because of their vibrantly colored finishes. This is because the majority of Savinelli pipes have stems that are made of Lucite which is a high-quality brand of acrylic. They come in an array of dazzling colors and are vibrant enough that they never require polishing. Vulcanite is also another popular material used on some of the stems which is a material that has been used for pipe stems for over a century.

The original Savinelli design models were inspired by what was then considered to be high pipe fashion in the 1950s, which is a traditional English shaping.  Over the years, Savinelli’s pipes have been decorated with a distinct Italian flair, in addition to using rich, bright colors. The Italian flavor of many of Savinelli’s most distinctive shapes is evident in the way the curves and weight of the pipe design exude luxury and refinement. One of Savinelli’s most popular and recognizable shapes is the 320 or Author.

How is a Savinelli pipe made?

Pipe making is an intricate art that requires dedication and patience. The first step in the production is to select briarwood. Savinelli’s briar comes primarily from Corsica and Sardinia. All of them are air-cured for a minimum of three years, regardless of how old they’re said to be when Savinelli acquired them.

Shapes for catalogs are categorized according to which form they most suit and then roughed in by machine. Despite coming from a factory, most of the work on a Savinelli pipe is completed by hand, with all of the finishing touches. The corners, curves, and final shaping are handcrafted. Artisans are involved in every process, from being sanded, sandblasted, or rusticated.

On the other hand, freehand pipes, such as the Autograph, are carved entirely by an artisan’s hands. An artisan crafts the entire pipe out of a briar block and a piece of Lucite or vulcanite from start to finish. Freehand shapes are considered to be the most difficult to make because they require a free hand to execute them in their entirety. These pipes usually take a few days to complete and require the most amount of time, skill, effort, and patience from all parties involved in the process. Only a few artisans at the Savinelli factory are allowed and skilled to make these types of pipes.

Condensation occurs in any location within a pipe’s airway where smoke may curl around instead of traveling in a straight, smooth line. Water vapor is unavoidable in any smoking experience, no matter how dry the tobacco is. The result is a ‘gurgle’, undesirable moisture in the stem that is difficult to draw through and even more so on your tongue.

Savinelli’s answer to this dilemma is a simple system of moisture traps or filters. The balsa wood absorbs extra moisture from the smoke like a sponge rather than allowing it to pass through it. The smoke never goes through a medium in a Savinelli pipe, unlike other filters.  Balsa filters are also easy to remove and replace when they become clogged or too dirty for continued use. A new, fresh filter can make a big difference in the quality of your smoke. You can easily get these packs of filters at Smoke Rings ‘72 a well-known cigar lounge in Brevard County.

The Rossi line has also been a hit among many cigar smokers. Rossi used to be the largest pipe producer in the world. When the company went on the decline after World War II, Savinelli purchased the Rossi name to continue producing the line. The current Rossi line was formed in response to the American market’s demand for an inexpensive, high-quality pipe from a reputable manufacturer.

Rossi pipes are all made by Savinelli, and they follow the same production methods as Savinelli. They are designed to be less expensive, but the briar is of the same high quality as other pipes produced at the Savinelli factory. The only difference is in the finish to keep the cost low. Rossi pipes usually have dark stains, a simple design, and less visually stunning wood. Nonetheless, Rossi is a fantastic beginner’s pipe and a great alternative for individuals looking for a few more pipes without breaking the bank.

Savinelli pipes’ craftsmanship is unparalleled. It’s what makes them such a unique and innovative company in the pipe-making industry. Owning a Savinelli pipe is definitely worth the investment, and it’s sure to be a staple in your collection for years to come. Visit a cigar lounge in Brevard County to find a variety of Savinelli pipes for sale.